English speakers encounter many pitfalls when they are learning Spanish. Below are five of the most common ones.

The often-repeated phrase ‘no problemo’ is actually incorrect Spanish. The correct thing to say is ‘no hay problema.’ One of the first things that is taught when learning Spanish is the fact that all nouns are either masculine or feminine. Generally speaking, nouns that end in ‘a’ are feminine and nouns that end in ‘o’ are masculine, but this is not always the case. Two of the more commonly misused words are ‘día’ and ‘problema,’ which are both masculine even though they end in ‘a.’

Even though it may sound wrong when literally translated by English-speakers, in Spanish, when talking about age, we use the verb ‘tener’ (tengo) even though it means ’to have.’ General rule of thumb: literal translations can be problematic. 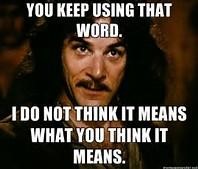 Students very often get mixed up with the meaning of the verbs asistir and atender.

The verbs ser and estar both mean ‘to be’ but cannot be used interchangeably. For English speakers, this is one of the trickiest concepts to understand and use well.  Basically, ser is used to describe permanent characteristics and estar is used to talk about temporary conditions (like being sick) and location. Although this is a very simplistic definition, I have attached a worksheet which includes a more comprehensive explanation of these two verbs and some practice exercises.

Tackling and conquering many of these rookie grammar mistakes is one way to move past the novice/beginner level of Spanish and therefore begin taking that first step toward foreign language fluency.

The Spanish verbs ser and estar both mean ‘to be’ but cannot be used interchangeably.  Generally, ser is used to describe permanent characteristics and estar is used to talk about temporary conditions (like being sick) and location.

When to use ser

The acronym DOCTOR is often used to help students remember when to use ser.

When to use estar

*When talking about an event’s location (a party, a concert, etc…) you use ser.

Choose estar or ser to complete the following sentences.

Diana Lamolinara is a native speaker of Spanish who has lived in the Spanish-speaking countries of Puerto Rico, Venezuela, and Spain. She also lived several years in Italy, where she studied Italian.  Mrs. Lamolinara has a BS in Business Administration and a BA in Foreign Language Education from the University of Maryland, College Park. Diana has been teaching Spanish to students at all levels from Pre School to AP for over 25 years.  She is a former homeschooling mom. In addition to teaching, Diana enjoys reading, exercising, cooking and taking long walks with her dog in the woods.  The Lord has blessed Diana and her husband with four children and three grandchildren.